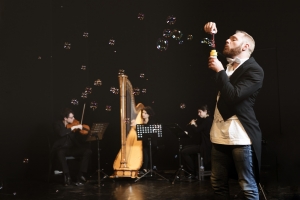 Gianni Rodari’s words in the mirror of the children’s music by Debussy, Schumann and … from our days

If the Telephone Fairy Tales (favole al telefono) were born from the imagination of Accountant Bianchi to put his little daughter, who just would not know how to fall asleep without a bedtime story, to sleep every night, albeit by telephone, so the Children’s Corner suite bears Claude Debussy’s dedication to his daughter Claude-Emma, known as Chouchou. And similarly Album für die Jugend was composed by Robert Schumann for his three daughters. Childhood as a source of inspiration for art, a vehicle for art at the highest level, dense with content that goes far beyond the dimension of childhood and accompanies the human soul to maturity.

In this journey of memories, images, imagination, words and notes, Michele Pirani is alternately Gianni Rodari, a child, Claude Debussy, a drummer, Robert Schumann and Rodari again. The music intersects with the words, commenting, accompanying, projecting imagination and emotions beyond the text.

TRAILER of the project here